Get the defence you deserve. 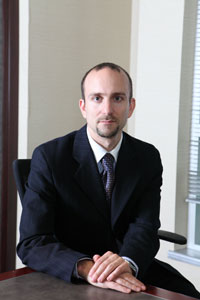 I received a Bachelor of Arts with Honours from York University followed by a Law Degree from the University of Windsor. I articled and then became an associate with the well-known law firm of Pinkofskys Criminal Trial and Appeal Lawyers; the largest criminal defence firm in Canada. I became a partner in 2008. In July, 2010, Pinkofskys became known as Rusonik, O’Connor, Robbins, Ross, Gorham & Angelini LLP.

I have appeared at all levels of trial courts in Ontario, as well as assisted with cases at the Ontario Court of Appeal. I practice exclusively in criminal and quasi-criminal law.

I am an avid believer in the values entrenched in the Canadian Charter of Rights and Freedoms and have focused my practice on defending breaches of individual’s rights; particularly in relation to weapons, drugs, and property related offences. I aim to ensure that all accused persons receive a fair trial and possible defence. I am known for being a fearless defender of my clients and have achieved numerous acquittals and crown withdrawals. I believe in making the Crown prove its case and do not agree with pleading guilty as the first option in most cases.

I practice throughout Ontario and represent individuals ranging from the upper class to those who cannot afford to retain a lawyer themselves. I accept Legal Aid for most cases.

I am also a member of Legal Aid Ontario’s “Extremely Serious Matters” Panel, which consists of criminal lawyers whose experience allows them to accept Legal Aid certificates and conduct trials for the most serious types of criminal matters. For more information on the standards required to be accepted on this panel click here.

I pride myself on always being available for my clients and am always reachable by phone and/or email. I can be contacted at (416) 428-7360, hershberg@criminaltriallawyers.ca, or by clicking here.